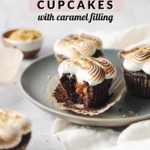 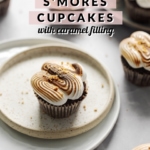 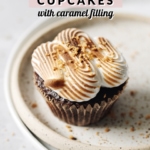 These s'mores cupcakes are made up of a fudgy chocolate brownie cupcake with the middle scooped out and filled with salted caramel and topped with toasted marshmallow meringue and graham crumbs.

Is it sad that I've never made legit campfire s'mores with the whole burnt marshmallow on a stick and circle of friends laughing around a bonfire thing? I mean, first of all, I'm pretty sure it's illegal to have campfires anywhere in Vancouver because of the strict wildfire laws. The thought of eating a marshmallow off a random branch is kind of unsanitary. And then there's the problem that I don't really have friends to do this all with. *cry laughing emoji or mostly just crying emoji*

But you know what? Blowtorches are a wonderful thing. I just finally got one and I can't stop trying to torch EVERYTHING. It's so much fun watching the fluffy white marshmallows instantly transform into deep brown and burnt hues. It's also scary which is why I guess I get a thrill from it and also make my fiancé do the torching while I prepare to put out a fire, just in case.

If you're interested, this is the exact blowtorch that I got. It's legit meant for soldering pipes so it's heavy duty and a low key flamethrower. BUT you can adjust the strength of the flame and the low flame is perfect for torching marshmallow meringue.

You can have s'mores in the form of s'mores cupcakes as the perfect end of summer treat. They're great for bringing to end of summer parties too. I don't miss a thing about campfire s'mores.

Anatomy of a s'mores cupcake

The salted caramel filling is the little surprise you'll find upon biting into one of these cupcakes. The caramel adds some flair and keeps the cupcake from being just chocolate. The meringue on top doesn't have much flavour so the caramel helps give the cupcake more sweetness and saltiness. The caramel is made by simply melting sugar in a pan and stirring in heavy cream and butter until it's thick and opaque.

The marshmallow meringue on top is the most visually pleasing part. The meringue is made by heating egg whites and sugar in a double boiler and then whipped until it's white, glossy, and stiff peaks. You should be able to flip the bowl upside down and the meringue shouldn't budge.

How to fill s'mores cupcakes with caramel

If a cupcake isn't filled with something on the inside, it's just boring. No boring cupcakes allowed here. These s'mores cupcakes are filled with salted caramel because they're just that extra.

To fill cupcakes, just scoop out the middle section of the cupcakes, about halfway deep into the cupcakes. A small melon baller works great for this. I have a double-ended melon baller and I use the smaller end to do this. You can also use a knife to dig out a small hole. You can then have a little snack with all the center pieces of cake. You need to taste test ok!

You want to fill the cupcakes with a filling that isn't too liquid otherwise the cake will just absorb it all. Something thick like caramel, buttercream, pastry cream, nut butter, or jam are great fillings.

How to torch marshmallow meringue without burning your house down

Blowtorches can be dangerous if you're not careful. Follow the instructions for your specific blowtorch.

If you have a kitchen or chef's torch, you may only have one flame intensity. If your blowtorch has an adjustable flame, use the lowest setting.

Using the lowest flame on your blowtorch gives you more time to evenly torch your meringue and you can even go over the same spot multiple times without burning it on the first pass.

Start from one side of the marshmallow meringue and quickly run the tip of the flame over the surface of the meringue, without staying in the same spot for too long. Go over any spots that need a little bit more colour again afterwards. 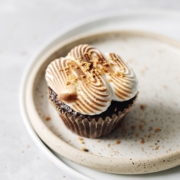