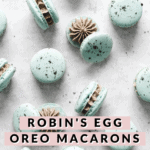 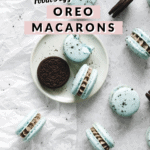 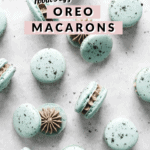 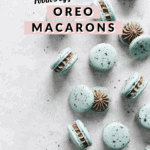 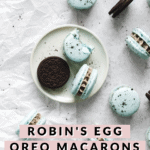 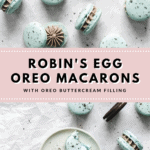 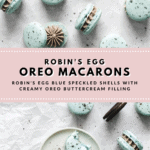 These robin's egg oreo macarons are coloured in a beautiful robin's egg blue colour, speckled with oreo crumbs, and filled with a creamy oreo buttercream.

I'm obsessed with anything speckled, especially speckled ceramics. I need more of those in my life! These robin's egg blue oreo macarons are speckled with sprinkles of oreo crumbs. Super easy way to achieve the speckled look without splattering food colouring everywhere. It's also kind of fun smashing up the oreo cookies.

The oreo buttercream is meant to taste a bit like the middle cream layer of an oreo. You can adjust the amount of crushed oreo cookies in the buttercream to achieve a more or less oreo flavour.

I can't make macarons without my favourite Bob's Red Mill superfine almond flour. This stuff is truly super finely ground. I never have an issue with lumpy shells and there are very few large almond chunks to discard after sifting this almond flour.

NEVER use liquid food colouring to colour macarons. Even a few drops will completely change the consistency of the batter and cause the meringue to deflate.

Only use gel, gel paste, or powdered food colouring for macarons. These don't add extra liquid to the batter and won't ruin your macarons.

How to make blue coloured macarons without browning or fading

Another common issue with macarons coloured with food colouring is fading colour once baked or browning of the shells which is especially obvious when you use colours such as blue or green.

I've had good success with high quality gel colouring such as Americolor or powdered food colouring. I used a blue and purple powdered colour here from Bulk Barn, if you're Canadian.

If your macarons continue to brown, try baking on a silipat or silicone mat or slipping a piece of paper until the parchment to prevent the bottoms of the macarons from browning. If the tops of your macarons are browning, make sure you're baking on the middle rack of your oven or adjusting the baking time or temperature.

Even if your macarons don't brown, the colour can shift towards yellow. Blue can turn a bit green after they bake (blue + yellow = green!). For these blue macarons, I added a bit of purple colouring to counterract the green and keep the pretty blue colour blue. 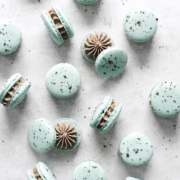