I can already hear all the Asian grandmas collectively groaning that macarons are not traditional Lunar New Year treats and also that they are too sweet. Well, dear grandmas, give them a chance! These mandarin orange macarons take one of the quintessential Lunar New Year fruits and stuffed it into macaron form for those who prefer something a little sweeter.

You can find cute little mandarin oranges in pretty much all Asian households around this time of year because they represent fortune and luck. The literal translation of its Chinese name "gum" is "gold" in English. Historically, they were little luxuries enjoyed by the upper class Chinese. So eat up to attract good fortune for the rest of the year.

In case you don't want to get scolded again by Asian grandmas, other (stranger) lunar new year traditions and superstitions include:

I always gave quizzical looks to anyone who told me not to shower on New Years Day and I'm pretty sure I didn't ever listen to them (aka my mom). But maybe that's why I'm not very lucky! Here's to hoping these mandarin orange macarons this year bring fortune, good luck, and happiness to you and me!

How to make mandarin orange macarons

This recipe is essentially a regular plain macaron shell with the mandarin orange part added into the buttercream filling. If you prefer, you can zest one mandarin orange and leave the zest out overnight to dry out before grinding into a powder and adding it to the almond flour mixture of the macaron shells. I elected to just add it to the buttercream because I didn't want to run the risk of getting lumpy shells and the orange flavour in the filling is already sufficient.

As with all macaron recipes, I highly recommend watching several videos to get a good understanding of the meringue and batter consistency that you need to achieve and the folding "macaronage" technique.

I used to separate my egg whites from yolks by tossing it back and forth between the egg shells. You run the risk of puncturing the egg yolk with the sharp bits of the shell when you do this and I learned the hard way from throwing out ruined egg whites that contained drops of egg yolk.

Instead, crack the entire egg into a separate, small bowl. Scoop up the egg yolk with your entire hand and gently pass it to your other hand a couple times, letting the egg whites slip through your fingers and back into the bowl. Then pour the egg whites into your mixing bowl before repeating with the second egg. This ensures that even if you break the yolk of your second egg, the entire batch of egg whites isn't compromised.

I always, always age my egg whites for 24 hours before I start using them. This dehydrates the egg whites and allows time for the bonds to break down a bit so that your meringue whips up quickly and remains more stable. You can do this by separating your egg whites the day before. Cover the bowl with plastic wrap and use a fork to poke a few holes on top. Then just leave the bowl in the fridge overnight. Take the egg whites out of the fridge about 15-30 minutes before using them to allow them to come back to room temperature.

Make sure your egg whites come to stiff peaks before adding the almond flour mixture. When you pull the mixer out of the meringue, it should create a point that shouldn't fall over. Be careful not to overmix it after this point though otherwise you'll end up with hollow macarons.

When folding in the almond flour and powdered sugar mixture into the meringue, stop once you are able to lift the batter up and let it slowly drip off the spatula while drawing a continuous figure 8 motion without the batter breaking apart. You can do this by first folding (scraping around the side of the bowl and then down the middle of the batter) the almond flour mixture until it is incorporated. Then start "smearing" the batter against the sides of the bowl while turning it. The batter should look like a flower with flower petals up the sides of the bowl. Then scrape it all back together by folding and keep doing the figure 8 test when it starts getting thinner. Again, try to watch videos on this macaronage technique to get a better idea of what this looks like. 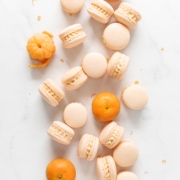