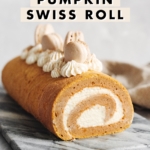 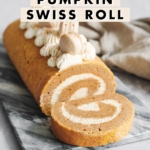 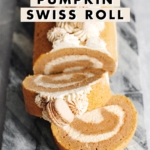 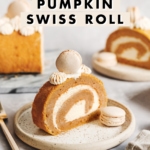 This pumpkin swiss roll is the fluffy, creamy roll cake of your dreams with a moist and airy pumpkin sponge cake, rolled with a whipped cream cheese filling, and topped with cinnamon spiced macarons. It's the perfect Fall dessert that's not too sweet or heavy!

Swiss rolls are one of my favourite cakes from my childhood. Because of their mesmerizing swirly appearance, I always thought they were harder to make than they actually are. The good news is: they're not that hard and I didn't need any special tools other than my regular baking tray and my trusty hand mixer.

This pumpkin roll is so soft and moist, with the perfect cake-to-cream ratio. It's so light and airy, you'll come back for seconds. This pumpkin spice version is the perfect Fall dessert. It's not too sweet and the pumpkin flavour is not too strong if you're not a fan of pumpkin. The cream cheese filling is divine and goes perfectly with anything pumpkin.

This pumpkin swiss roll is beautiful served as is. The swirl design is the main attraction! You can also top it with extra cream cheese frosting and any garnishes you want to make it look even more bakery-worthy.

Why you'll love this recipe

What is a swiss roll?

A swiss roll is a cake that is baked as a flat rectangular or square sponge cake and then rolled up with a layer of whipped cream into a log shape. They are served by cutting the log up into thick slices. The light and airy sponge and cream filling are the perfect base for various fruit fillings and toppings.

Despite the name, swiss rolls don't actually have anything to do with Switzerland or the Swiss! It's not clear how this name came about but this kind of cake roll is believed to have originated somewhere in Central Europe. Swiss roll is the name that is most commonly used for this kind of roll cake in Asian countries, likely due to the transfer of the name through colonization.

How to make a pumpkin swiss roll

Make the pumpkin sponge cake: In one bowl, whisk together egg yolks, sugar, pumpkin puree, vanilla, milk, sifted flour, and pumpkin spices. In a separate bowl, whip up egg whites and sugar until it reaches stiff peaks to create a meringue. Fold the meringue into the pumpkin batter in the first bowl until it's airy and fluffy.

Spread batter into baking sheet and bake: This recipe makes enough batter to fill a regular half-sheet baking tray. It is quite big and the final roll will yield about 10 slices. If you're using a smaller jelly roll pan, you can potentially halve the recipe. As long as your layer of batter is about ½ inch thick, you're good to go. Bake it off and don't overbake.

Roll it up and let it cool: When the cake comes out of the oven, immediately remove it from the baking tray and roll the cake up with the parchment paper separating the layers. Let the cake cool completely before unrolling it.

Assemble your swiss roll: Unroll your cooled cake and spread a generous layer of whipped cream cheese on top. Roll it up again, without the parchment paper this time, and wrap with parchment paper and/or plastic wrap. Chill the swiss roll in the fridge for at least 3 hours or overnight before cutting into it.

Cover or wrap this pumpkin swiss roll with plastic wrap and store it in the fridge for up to 5 days.

Leftovers can be frozen by wrapping the slices well with plastic wrap and/or aluminium foil and freezing for up to 1 month. Thaw in the fridge overnight before eating.

What's the best way to roll a pumpkin roll?

Why does my swiss roll crack when I roll it?

Pre-rolling the cake straight out of the oven while it's still warm helps prevent swiss rolls from cracking. The swiss roll will be more likely to crack if the cake is too dense or too dry.

Can I use aluminium foil instead of parchment paper to roll a pumpkin roll? 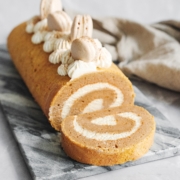