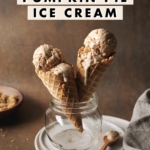 Creamy no-churn pumpkin pie ice cream made with real pumpkin, pumpkin spices, and speckled with bites of pie crumble pieces. It has all the components and flavour of pumpkin pie but in ice cream form!

I'm a huge advocate of ice cream in the Fall and Winter season. Somehow it seems to taste even better when it's chilly out and the deeper, autumnal flavours are a welcome change from typical Summer flavours.

Pumpkin pie ice cream is the flavour combination I look forward to the most every year. The warm pumpkin spices smell and taste so delicious in contrast with the creamy ice cream base. Don't forget the absolute BEST part: the bits of chewy pie crumble scattered throughout the ice cream. They're an ode to pie crust and add some texture to this ice cream.

This pumpkin pie ice cream is made with my go-to no-churn method with whipping cream and condensed milk. You can just pour the ice cream into a container and freeze it overnight with no ice cream maker needed.

Why you'll love this recipe

Add in pie pieces: Add in half of the pie crumble and fold one or twice to combine. Pour ice cream mixture into a loaf tin. Sprinkle the remaining pie crumble on top.

Freeze: Wrap with plastic wrap and/or aluminum foil and freeze for at least 5 hours or overnight until set.

Always store your no-churn ice cream completely sealed with plastic wrap and/or aluminum foil to prevent ice crystals from forming and to keep the ice cream fresh and soft. This ice cream can keep in the freezer for up to a month but it is best enjoyed within 1-2 weeks.

Before scooping, leave the ice cream out at room temperature for 4-5 minutes to soften. Run your ice cream scooper or spoon under hot water for easier scooping.

What does no-churn ice cream mean?

No-churn ice cream just means that it's ice cream made without an ice cream maker. Ice cream makers constantly churn the ice cream during the freezing process to prevent ice crystals from forming. With the no-churn method, we use a combination of high fat cream, whipping air into the cream before freezing, and adding enough sugar content to achieve the same result as an ice cream maker.

Why is my no-churn ice cream icy?

Other pumpkin recipes to try 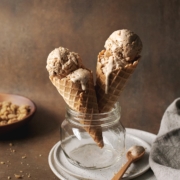