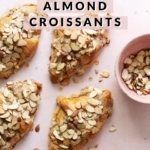 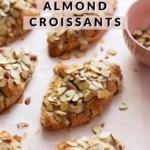 What are almond croissants?

Almond croissants are the crispy, double-baked evolution of day old butter croissants into a crunchy and sweet new pastry.

Regular croissants are filled with an almond frangipane that melts down and turns into a custard-like filling. Baking the croissants a second time makes them super crisp and caramelized.

This version of the almond croissant involves soaking the croissants in an earl grey simple syrup to add another flavour dimension.

Simple syrup is ridiculously easy to make and can be used for anything from soaking cake layers to keep them moist to sweetening and flavouring cocktails.

All simple syrup is made with a 1:1 ratio of water to sugar. They are heated together until all the sugar dissolves into the water and creates a thin, sweet syrup.

Simple syrups are so versatile and can be infused with pretty much any flavour. To make this earl grey simple syrup, earl grey tea is simply steeped in boiling water before the sugar is added.

Almond frangipane is a mixture of almond flour, butter, sugar, and eggs most commonly used as a tart filling. A generous layer of frangipane is sandwiched in the middle of each croissant.

Once baked, frangipane becomes a crumbly, custard texture that is soft from the almond flour and sweet but light in flavour. As the frangipane melts out of the croissants onto the baking sheet, it becomes caramelized and crisp. 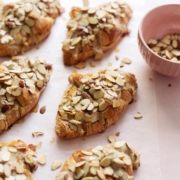