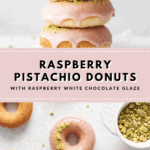 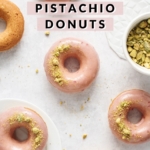 These baked raspberry pistachio donuts were created with Spring in mind. They're cakey, fluffy baked donuts covered in a thick white chocolate raspberry glaze and topped with crushed pistachios to create the perfect Springtime donut.

What's the difference between baked donuts and fried donuts?

Baked donuts are made with a regular batter like a cake or muffin. The batter is piped or poured into a metal donut pan and baked until the donuts rise and form the donut ring shape you're familiar with.

Fried donuts are usually made with a yeast-based dough that requires proofing time like bread. The yeasted dough is rolled out and cut into donut shapes with a round cutter and fried in oil.

I love making baked donuts because they're so much easier than yeast or fried donuts and they have that cake crumb texture that satisfies my cravings without needing to bake a whole cake. There's no resting time or hot oil involved so they're faster and easier to make.

How to make baked donuts without yeast

Preheat your oven to 400°F and lightly grease a donut pan with butter.

In a small saucepan, heat the butter, oil, and milk on low heat until the butter has melted. You can use any kind of flavourless oil - I used avocado oil in mine.

Remove the pan from the heat and let cool to body or room temperature. When you dip a finger into it, it should feel neither warm nor cool.

While the liquid mixture is cooling, measure out the flour, sugar, baking powder, baking soda, and salt into a medium bowl and whisk together until combined. I used my trusty GIR Ultimate Whisk for anything and everything.

When the liquids have cooled to room temperature, add in the egg and vanilla extract while whisking and mix until combined.

Pour the liquid mixture into the flour mixture and fold together using a silicone spatula (I love my GIR Ultimate Spatula for this) until just combined. There should be no large lumps of flour but don't overmix.

Transfer the batter to a piping bag and snip off about 1 inch from the tip of the bag. Pipe rings into your donut pan, filling them about ¾ full.

Bake these pistachio donuts for about 10 minutes or until lightly browned and a toothpick in the center comes out clean.

How to make raspberry glaze

This white chocolate raspberry glaze has become quickly one of my all-time favourite glazes for donuts. It's just runny enough for easy dipping but thick enough to not completely drip off the donuts. The white chocolate allows the glaze to harden and become opaque once cooled.

In a double boiler, melt the white chocolate, whipping cream, and a good quality raspberry jam until it's smooth and pink in colour. You could also use pureed fresh raspberries instead of jam.

With a fine mesh sieve, sift in powered sugar and stir until the glaze is smooth and no lumps of powdered sugar remain. You may need to scrape any lumps against the bowl to dissolve them but sifting it helps.

Remove the bowl from the heat. The glaze will thicken as it cools. Stir it occasionally to check the consistency. If drip the glaze onto itself in the bowl, it should form a "lump" on the surface and disappear back into the glaze after a few seconds.

It's time to dip! Dip the smoothest side of the donuts into the raspberry glaze halfway and gently wiggle it as you pull it back out to ensure the glaze coats the surface. Let some excess glaze drip off, flip it over, and place on a wire rack. Sprinkle with crushed pistachios while the glaze is still wet.

This glaze will set and become dry to the touch if left at room temperature. Chill these donuts in the fridge if you want the glaze to harden so that you can wrap them with plastic wrap without ruining the glaze. 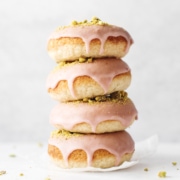